NOISE exhibit @ Venice Biennale 55 based on my book: Immersion Into Noise 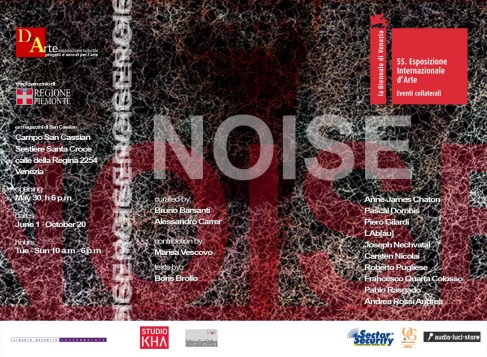 One hundred years after The Art of Noise by Luigi Russolo, the exhibition reflects upon noise as a necessary condition and an integral part of any communication process. The role of art is to render dense with meaning that part of communication which usually escapes codification and understanding, so to return to an essential principle of indeterminacy. By assuming a modus operandi based on listening, or immersion, the artists chosen for the exhibition place processuality in a privileged position with regard to the demands for representation, while locating in what might be termed error an essential precondition for coming to understand the complexity of existence.

This project takes as its starting point a book published in 2011 by the artist Joseph Nechvatal, Immersion Into Noise. In the text, the artist outlines an aesthetics of noise as an experience of excess that contains in it a politically oriented strategy to be explored as a means of addressing the state of semantic impoverishment in which art today resides due to the value accorded to spectacle and decoration by a globally mediated late-capitalist society. For Nechvatal, the art of noise represents an element of resistance capable of offering new relational modes whilst drawing us directly and authentically towards “our inner world, to the life of our imagination with its intense drives, suspicions, fears, and loves (…).” The operative potential of noise art – which traces its theoretical foundations through Nietzsche by way of Deleuze and Guattari’s rhizome, Russolo’s noise music, Jarry’s Pataphysics, the writings of Bataille and Debord, Fluxus, Jimi Hendrix and neuroscience – offers us a means of overcoming the abuses of the spectacle, with its instant legibility, that is often typical of art today. Its view is towards a return to the essential principle of indeterminacy. In its usual sense, noise is understood as an element of interference and disruption in the atmosphere and/or in communication. In acoustics, noise is a disruptive factor at odds with the data transmitted within a system; in electronics, it refers to all the unwanted signals which interfere with the useful transmitted signal or the signal to be processed, typically found on a channel (medium) of human or electronic communication; in psychology, noise is a disruption caused by an excess of information, such that even a potentially useful piece of information is unrecognised or difficult to identify. Despite the fact that words like “noisy”, “unpleasant” and “grating” are often used to describe the sound of harsh dissonance – i.e. the quality of sounds that seem unstable and are characterized by a need to resolve to a stable consonance – in actual fact all music with a harmonic or tonal basis incorporates some degree of dissonance. “Noise” is thus an integral part and must be considered in terms of immanence. It is not simply a parasite distorting an object of communication, rendering it grating or incomprehensible, but is in fact a constitutive element. Noise art is founded on the principle that noise is part of the object on an ontological level; it is its necessary condition. Its validity is based on the assumption that “while rhizomatic growth and inter-relations are unpredictable (Deleuze), this does not mean that they proceed randomly. Noise may break some connections, but connections will always continue to grow in other directions, creating new thoughts and new affects.”
*
In other words, the role of art is to render dense with meaning that part of communication which usually escapes codification and understanding – NOISE.
*** 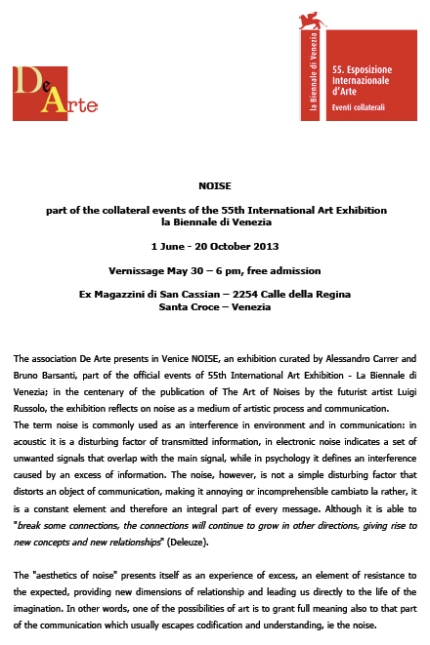 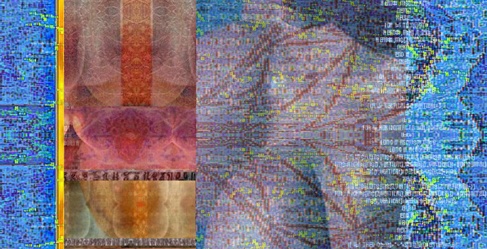 This is the painting that the curators Bruno Barsanti & Alessandro Carrer chose for the group show I will be in – based on my book “Immersion Into Noise” – at the Biennale di Venezia 55.