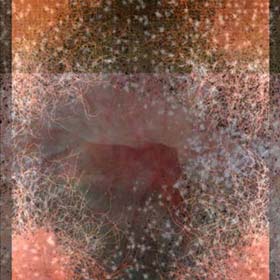 Joseph Nechvatal (born in 1951 in Chicago) is a post-conceptual artist working in digital art. He is one of the most important pioneers of ‘new media art’, but at the same time makes use of ‘old media’ (such as painting and drawing). What is phenomenal, and in our opinion relevant to the 21st century, is that his paintings are created through a use of custom artificial life software and computer robotics.

The exhibition, subtitled Immersion into Noise, is Nechvatal’s first solo show in Berlin and presents recent works to a Berlin audience alongside his eponymous book Immersion into Noise (2011). In that text, Nechvatal provides visual analogies to audio noise within the powerful effects of the act of immersion.

In the bOdy pandemOnium exhibition, and in Nechvatal’s work in general, the term viractualism, meaning the interface between the biological and the technological, plays an essential role: “The basis of the viractual conception is that virtual producing computer technology has become a noteworthy means for making and understanding contemporary art. This brings art to a place where one finds the merging of the computed (the virtual) with the uncomputed corporeal (the actual).”

Parallel to his theoretical research, Nechvatal has created a series of paintings and projections that show  a C++ custom virus program (created with the programmer Stephane Sikora) invading, destroying and transforming his painterly art images based on intimate parts of the human body. In the exhibition at Art Laboratory Berlin, two large computer-robotic assisted paintings will be on display: frOnt windOw retinal autOmata (2012) and rear windOw curiOsites (2012).

Also on view will be one of his famous viral computer software de-generative works: Viral Venture (2011). It is accompanied by a musical score for two hundred electric guitars by the composer Rhys Chatham.

An Artist Talk with Noise Music Concert of his piece 3 pOstmOrtems will take place on the opening weekend, on Saturday, 25 April, 2pm.