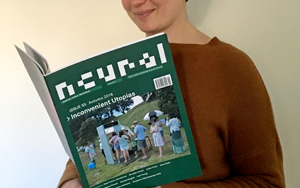 Joseph Nechvatal is a post-conceptual artist and also an art theorist. He usually creates unusual paintings and computer animations with the recurring use of computer viruses designed for these purposes. The lyrics of Destroyer of Naivetés: Computer Virus 1.0 have the shape of a muffled and passionate narration. It walks on a carpet of drones and sound overlaps of improvisatory origin, not far from some experimental and evocative jazz modulations. The sound background later evolves into sweeter and minimal breaks, some simple guitar chords. However, the voice always keeps a psalmody tone and some dissolute utterances inspire the lyrics. The work is reminiscent of erotic literature, but actually the main themes are the same as seven historical paintings by the author. The works date to 1993 and were part of HyperCard Computer Virus Project, a work where the AIDS virus epidemic and the increasing and predictable concern about the exponential growth of computer viruses were connected. The hacker culture unconscious and the background of these actions are still current for the audience even after 25 years; think of the huge success of the series Mr Robot. On the other hand, we hope that some artistic-philosophical waves inspired by Borrough (viral invasion) and Baudrillaud (international terrorism) might again create some relevant works following these steps. Joseph Nechvatal reminds us that “the virus is also the basis of a creative process” and creates some beauty and interest from the point of view of art history. Probably now this vision translated into an overlap of music and lyrics is an out of time action, with words replaced by automated procedures, which are complex and socially difficult to control. The final effect of the work is anyhow charming and brings us back to a tradition of experimental music and text, which we had lost track of.